skip to main | skip to sidebar

Valentine's day prix fixe was a great gage at what we can accomplish now that another set of solid hands is present. The scallop, semolina gnocchi, and pork belly first course dishes all were extremely solid, second course yes and no. We ended up changing the short rib ravioli into a croquet. And i still feel like our weak link is pastry obviously because that is the least experienced area for all of us. O and we got an induction burner which really opens up the prep door especially during a busy lunch when the entire six burner is in use.
Posted by cheflife at 10:21 AM No comments:

well well well... i suppose since a lot has changed i should start updating this thing. Well i no longer live in Pittsburgh, my girlfriend is now my fiance, and i am cooking in a small southern Ohio college town. Valentines day is coming up and you can expect some pics and menu to follow.
Posted by cheflife at 8:07 AM No comments: 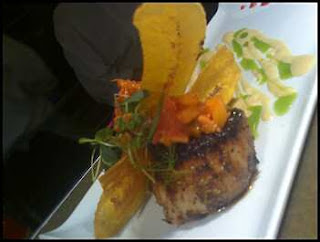 One thing a lot of people don't understand as they sit behind there desks nine to five, rushing home to watch the next food network star and exclaiming the word foodie when the topic of potato salad comes up at the family BBQ is this: A chef ain't shit with out his boys (cooks)

Take the last post for example. I conceived the dish. I worked out the recipes. I turned to my saute cook whom Ive known for 7 years and said " Put it on a rectangle plate, garnish on top, sauce under"

and after banging out roughly 20 of them he came to the presentation to the right. Its all about recognizing the ones you can let the leash out on and the ones you cant.

A good chef will give back as much, if not more than he takes from his crew. He will stand monolithic, representing an ideal and a philosophy. He will encourage and nurture. He will be right beside you when you do 450 covers and your arms are hairless and screaming from the hot saute pan handles kicking back onto your forearms. And unlike so many parents out there he wont be afraid to tell you to stop fucking up.

When you go to work and the chef doesn't talk food, doesn't leave the office, doesn't print out articles off websites for you, and cant cook your station better than you, get a new job. Simple. Its just a give take relationship. You give, he takes.
Posted by cheflife at 7:15 AM No comments: 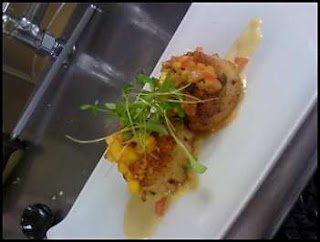 Over the course of the next few days I'm going to be posting about a couple of menu changes. The scallop app is the one I'm most excited both in its execution and the fact that it is a step away from the somewhat dated previous incarnation. Its a Jerk seasoned u-10 day boat scallop, Plantain horseradish nage, mango sambal. The flavors of Africa have been kicking around in my head lately and i figured that the humid, sticky weather we have been experiencing in the burgh would be a good platform to incorporate them. The challenge lies in making it unique and accessible at the same time.

Plantain nage
2 super ripe plantains
1 large shallot thinly sliced
2 tablespoons roasted garlic
2 tablespoons fresh horseradish
1 cup dry white wine
1/2 quart heavy cream
salt and black pepper to taste
Start by sweating shallot, add roasted garlic and horseradish when translucent. Add plantains and deglaze with wine. Reduce Au sec then add cream and reduce by a third. Salt and pepper then puree and pass through a chinos
Giving credit were its due, ideas in food are the inspiration for the plantain and horseradish combo. The idea for the mango sambal come from Marcus Samuelsson's latest book. Using the book as a guide on African flavors i arrived at this version of sambal. I will post the recipe later as it was a hectic day and i didn't really get a chance to document it.

Posted by cheflife at 7:29 PM No comments:

Or how cooking saved my life you could say. After much thought and contemplation I decided that a little background was in order before my professional exploits are laid out for all who stumble across here to see. We could say that my journey down this path started eleven years ago when I got my first job in a kitchen, but the culinary world dug its claws into me as early as I can remember. Fortunately now, I just happen to be able to make a living doing something that, for me and mother, was such a deep connection it was almost omnipresent, always there moving around us.
I grew up with my mother, a single mom making ends meet off of disability checks and welfare, in a little shit town in Ohio. My Saturdays and Sundays as a small child of 5 or so ran the gamete from waiting in line at church soup kitchens and the Salvation Army for a generous disbursement of lentils, beans, shitty government cheese, milk and eggs 2 days spoiled.
But cooking the sparse goods the Salvation Army gave us every 2 weeks were the memories that stuck with me more than anything. Her hands would move across beans soaking them and cooking them fork tender, her face would beam with serenity as she worked that old milk and eggs into biscuits and brownies. And no matter how much I wanted the material goods I saw easily in the grasp of my neighbors, classmates and friends, I had the comfort of food made with delicate but worn and loving hands.
This was the connection that was the strongest between my mother and I, the craft of cooking. Even thought I was half way through my teens before I would professionally start cooking and I never cooked at home, I knew the feeling of love and care found in food. And like all teenagers, at times I took it for granted.
After cooking my way through high school I decided to enroll in culinary school and move to Pittsburgh. Also at about this time the pain of not having my father around had manifested itself in the form of a nasty, horrible temper and a drinking problem. Then one day in September, four hours away from home and two weeks into skills class, I received a phone call from my uncle. My mother had died unexpectedly in her sleep. I was crushed.
After the funeral and a month off of work, I returned to Pittsburgh. A chunk of me was vacant, and I didn't know how to fill it. I contemplated not going back to school but I figured that I had nothing to lose. And not until I set foot in the classroom again did I realize that the feeling, everyday, of molding things with my hands, seasoning, searing and tasting was my way of finding that connection I had with my mother all over again.
It changed me.
It pushed me.
It drove me.
I am the man I am through the loss of her, but in leaving she gave me so much.
Cooking is in my blood.
Posted by cheflife at 1:42 PM No comments: